January 21, 2012 — “Kingston’s Marine History” — Ron Walsh, a retired school teacher with a particular interest in ships, delivered a lively presentation illustrated with photos of ships and people. We realized that before the days of railways and highways, waterways were the only way to move goods and people, and many of our ancestors would have worked in a water-related occupation. If they weren’t building or sailing boats, they may have helped to put goods on or off of them.

February 18, 2012 — Silent Auction of genealogical books, magazines, newsletters, maps, … the Library Committee and other volunteers spread out the contents of 23 boxes, which had been previously sorted and given a bidding slip with a suggested starting bid. When “Time” was called and successful bidders collected their goodies, many had to use one of the 23 boxes to carry their purchases home. Our morning’s efforts, plus pre-sale of some books through a dealer, resulted in $996.50 being added to the Branch’s coffers. The old saying is obviously true: one person’s trash is another person’s treasure!

March 17, 2012 — Ron Mann, “Some success stories in my Irish Research”. Ron showed how he determined the parish and townland for one family working from a collection of family memories passed down to distant cousins. In another case, he used land records to confirm several generations of a family. He discussed the need to research from Canada first, before finally making a visit to Ireland in order to see original church records and legal files.

April 21, 2012 — There was no local meeting. A busload of Kingston branch members went to Ottawa for the Region VIII AGM and Genealogy Day. This was held at the new City of Ottawa Archives. Several members made use of the archives as well as hearing three speakers — a most enjoyable day of genealogy.

May 19, 2012 — Agnes Glenn spoke about preparing a book on her Chambers family. She described how she collected photos and stories from extended family members, arranging the material into a book, and discussed details of printing and distributing her book.

November 17, 2012 — “If I Had a Time Machine …” — Several members spoke about the ancestor they would really like to meet and talk with, if only they had a way to travel back in time. 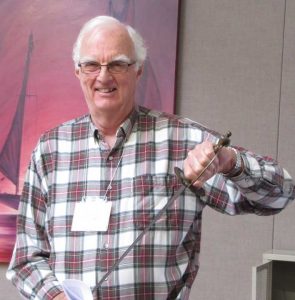 Full write-ups of the talks  can be found in the newsletters which follow each meeting date, available in the Members Only section of this website. Some  handouts ncluding clickable web links are also available there.